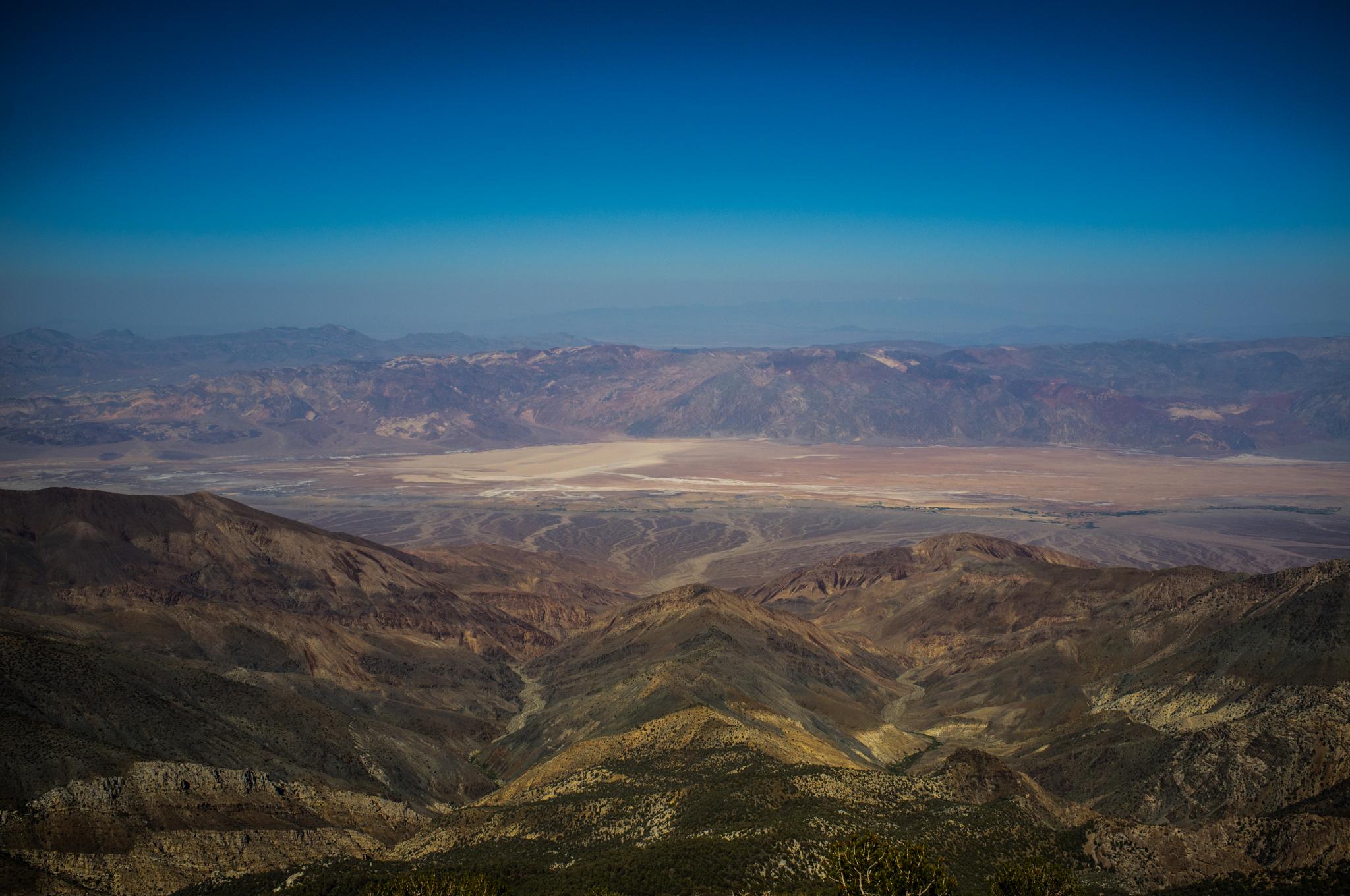 10,000 ft elevation gain in a day, the holy grail. Just those statistics had me stoked. I had been hoping to bag those numbers for a few years. Bad water to Telescope Peak: starting elevation -200 ft, ending elevation 11,043 ft. There is no maintained trail. I mean just starting a hike below sea level is amazing enough! I had been throwing all these interesting “facts”Â at a few of my hiking friends hoping someone would bite but no luck. Brian was interested but it never materialised. Fast forward to this year and Grand Canyon Rim to Rim was on the calendar. We needed preparation hikes. I slyly suggested Bad water to Telescope Peak would be good training (more like it would be way harder than anything the GC would
throw at us!). The idea got traction and we decided to do it the weekend prior to GC!

I love Death Valley. I think it’s my favourite National Park in the lower 48. The vastness and geological variation is spectacular. It’s just a special place. The vastness is best experienced first hand setting up the logistics for doing this hike. We decided to hike from Bad Water to Telescope Peak and then head back to the Telescope Peak trail head instead of pummelling our knees with 11,000 ft of down hill. Drive from LA to Mahogany Flat camp ground (Telescope Peak regular trail head to drop off one car) 5 hrs. Drive from Mahogany Flat to Hanaupah Canyon (Shorty’s Well, Bad Water) 3 hrs!

We reached Shorty’s Well in the evening after dropping off my car at Mahogany Flat. Driving up to our camp for the night we could see Telescope Peak in the far off distance. It seemed really far, Brian felt it was already in the bag. Rest of us cringed. For dinner Brian made potatoes, onions and carrots over a fire (emulating some French guy in Patagonia) which tasted amazing. We slept by 8pm. It was still warm after sun down so I slept out in the open.

2:30am and we were on the go. Brain and Hannah had their headphones on, Corinne was charging up the trail as usual, I was cursing the road surface. The first 9mi or so is a 4×4 dirt road which climbs the alluvial fan up to Hanaupah Canyon and as such is more suitable for off road vehicle travel. We were going at a good pace, about 3mi/hr and were at the road’s end by dawn. I had google mapped/satellite viewed the route over and over as the trail was unmarked. Heading deeper into the canyon we could soon hear the gurgling of a stream. This is the location of Alexander “Shorty” Borden’s Mine. We stopped for breakfast and marvelled at Shorty’s tenacity to construct the Hanuapah Canyon road and then the mine at the ripe age of 66! We refilled our water supplies as this would be the last source of water all the way to our car now.

The hike so far had been gentile. Gaining ~3000ft in 9mi, nothing to write home about. We now faced a wall. 8000ft to gain in less than 6 mi. I was actually looking forward to it after all the shallow climbing. Having read enough trip reports, I made sure we didn’t follow the obvious road heading to Shorty’s Mine and beyond. Instead we hit the slope immediately to our right to gain the ridge above. Man was it steep! More like from that point on, everything was steep! Looking up from the ridge it was still a long long ways to go.

We traversed the ridge towards Telescope, dropping in elevation regrettably as we got on to the mountain proper. It had started to get warm but we kept going upwards, the only direction. We planned to take our lunch break once we got higher enough into the denser vegetation so we could eat and rest in shade. My legs were starting to cramp, I started taking smaller steps which only made me slower. I finally got to our lunch spot and laid down in the shade for some nice rest. After having some great tortillas and electrolyte water I felt better. But not as great as Corinne who it seemed had just started her hike. The next 800-1000ft were absolutely brutal. The gradient was relentless but we kept going not willing to take a break until we hit the main trail (well, I cheated and stopped like every 10 odd steps)

It felt amazing getting on to the main trail. We had climbed through the hardest part in fine style. We dropped our packs off on the trail and continued on the now very easy terrain to the summit. I really wanted to spray to anyone on the trail that we came up all the way from Bad Water 10,000 ft down there but most of the passing hikers didn’t really fathom our achievement. Probably they were delirious from the heat. We reached the summit at around 3pm after
12 hours absolutely exhilarated and partly exhausted.

I proclaimed the hike Bad Water to Bad Ass

After doing the summit formalities of selfies and filling the summit journal we headed back. Little did we know that the trail down to Mahogany Flat would be ridiculously long winded when it could have just dropped down into the valley and cut down the 7 mi distance into half! We reached my car at 6:30pm. 15 hrs of the most crazy day hike were followed by 3 hrs of driving to the 2nd car at Shorty’s Well and then the 6hr drive back to LA.

We vowed we’ll never do Telescope Peak again although, I was already thinking of doing the 11k ft up and down. Any takers?