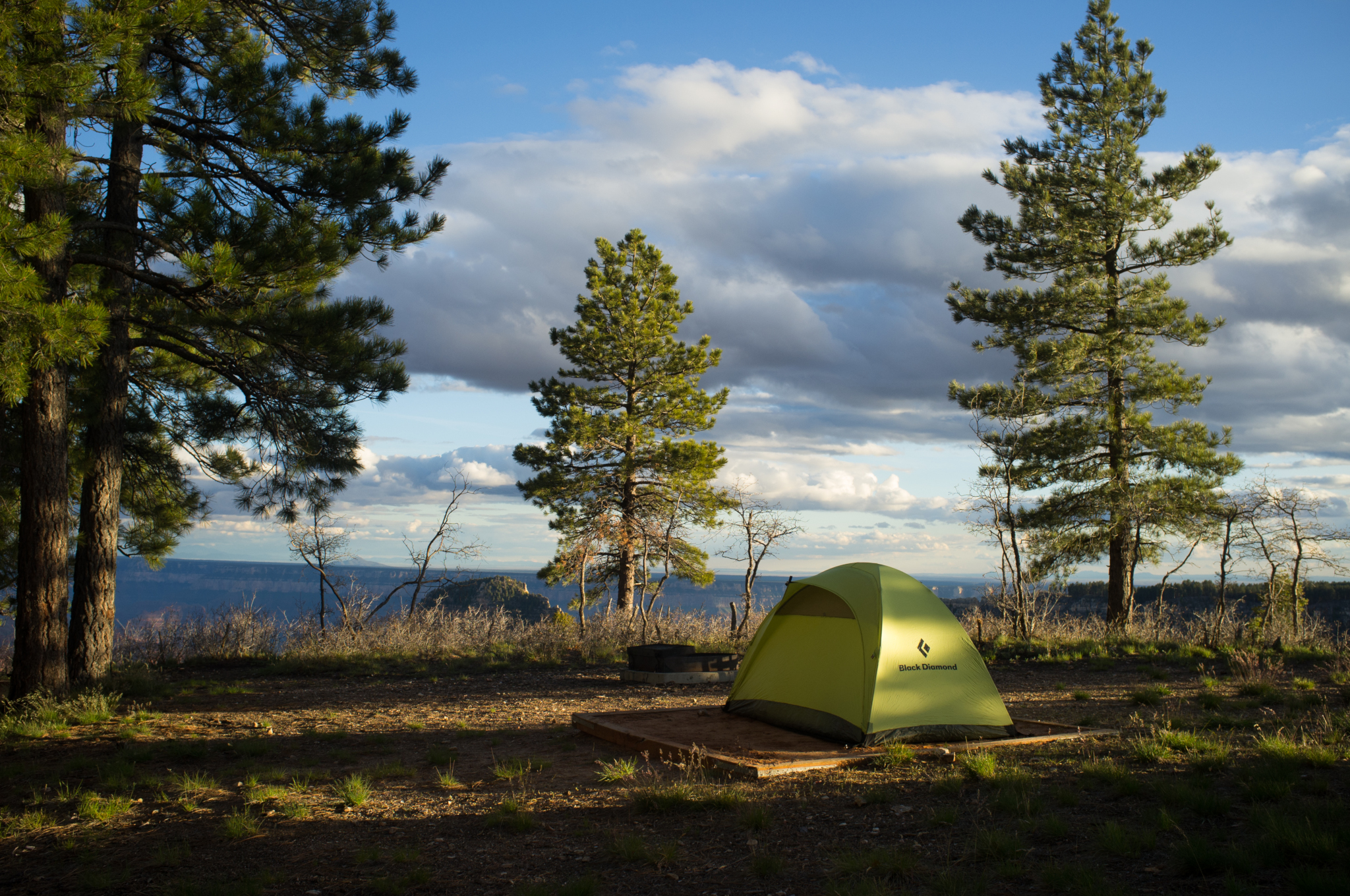 A proven way to gain weight is to hike the Grand Canyon Rim
to Rim in a day. As absurd as that sounds, it was the case for me. Disclaimer: Might not quite work for everyone.

Early on this year Corinne had been super stoked about doing GC R2R, influenced by the semi-rad post . I had attempted the crossing a couple of years ago as an over night camping trip but had to turn back the next day after my friend hurt his knee so I had unfinished business. Brian and Hannah are always up for a walk in the park. The permits being a lottery and all, we decided to do it in a day which is more “epic” any ways. Corinne did all the logistical leg work and planned for early May as the optimal time. The plan was to do it North to South so that we would have less elevation to gain during the later part of the hike. We even started trail running in early February as preparation. We hate running.

We dropped the ball a bit and come April we didn’t really have any on the Rim accommodation. All the camp sites were booked. I kept checking recreation.gov as often as I could. Luckily a group site opened up at the North Rim for the 16th of May, a day after the North Rim opens. Occupy a 20+ person site with just 4 people? I snagged it, it had to be done. I happily announced my internet triumph to the rest of the crew. Everyone was stoked until Hannah realised her family was in town the same weekend.

Corinne and I continued our trail runs, if not the GC at least we’ll be fit for the rest of the season. As May drew closer we decided to go for it. I still had the reservation. Two people occupying the group site, we would pretend that we were waiting for the rest of our group. Look at our watches constantly, try to make desperate phone calls, not make eye contact with other campers, sneak away before dawn.

We left LA Friday evening and drove up to Needles and reached the South Rim at noon on Saturday. The Trans Canyon Shuttle Service would take us to the North Rim, a five hour journey! I tried to nap amidst conversations of 24 hour tough mudder and 100 mi runs. The landscape was varied from large desert expanses to weather beaten cliffs with a crop of trees at higher elevations. A large portion of the forest near the North Rim had been burnt and looked quite eerie. Closer to the park entrance the meadows were still covered in snow and had a number of deer prancing around. I wished we had stopped along the way and taken a few photographs. The North Rim is less crowded and a lovely place to camp. We checked in with the camp host and she offered to relocate us to the hiker/biker walk in camp site. Not only did I get the $40 refund, we probably got the camp site with the best view!

We had dinner at a canteen next to a fancy restaurant and went to sleep by 9pm with our alarms set for 3:30am. We were prepared for the cold night but it meant lugging a full pack across the canyon. At 4am we were on our way. The camp site was about 1/2 mi from the North Kaibab trail head. At the trail head we were greeted by students from the University of New Mexico who were conducting a survey of people hiking/running the canyon R2R. They wanted to gather data pertaining to how much food/water is consumed during such endeavours. We agreed to participate and were given a florescent tag to wear on our wrist so volunteers at Phantom Ranch and the South Rim could identify us. We filled a questionnaire about what we had already consumed and were weighted in. I felt like a pro.

We could see a few headlights shining along the trail. We weren’t the only ones making a pre dawn start. The trail dropped quite steeply as it zig zagged it’s way down the canyon walls. The sun
started to peep over the towering canyon walls and we were soon passed by our first trail runner. I could see her running past a few switch backs down below, then over the first bridge and soon she was gone. She would probably be on her way home (or back) while we would barely make it half ways I wondered.

The canyon opens up past the Pump house Ranger station from where on it is a shallow grade to Phantom Ranch albeit a 7+ mi slog. The weather was still pleasant and we past trail runners about every mile or so heading in the opposite direction. We were keeping a steady pace considering we were hauling a tent, warm sleeping bag, warm clothes plus food and water. The canyon walls started to narrow again and soon the amount of visible sky diminished. The walls parted again and at a short distance we could see Phantom Ranch. It was 10am when we checked in with the survey volunteers. 2 apples, 1 cucumber, 1 cliff bar and about a 1.5 litre of water that was my fuel consumption so far. We took a short break. Corinne had coffee at the Phantom Ranch, I stuck to water.

The Colorado river seemed calm considering it was responsible for carving this huge canyon. Standing at the bottom of the canyon one could only feel insignificant. We made the mistake of crossing the river over the Black Bridge as it took us to the foot of the South Kaibab trail instead of the Bright Angel Trail. We added about a mile of walking along the river to get on the Bright Angel Trail. It was starting to get hot. We had all the uphill business to do during the hottest part of the day! Rest of the trail up to Indian Garden would provide sparse sun protection and no water.

I started moving quickly hoping the ordeal would end sooner. It worked for about half the way up. Soon Corinne was almost out of sight but the steeper gradient was behind me. The vegetation was getting more lush, an obvious sign that Indian Garden and a well deserved rest were close. I limped my way to a bench in the shade. I was tired. My legs were hurting. There was still over 4mi to go with lot more steeper climbing to come. We had lunch, refilled our water and were on our way. I was only thinking of getting to the 3mi Rest House, the 1.5mi Rest House and then to the rim. Slowly but surely we were getting closer. There was a fair amount of foot traffic and everyone seemed to be suffering.

We finally made it to the South Rim after about 11hrs. It felt great. We just walked the Grand Canyon in a day!! We checked in with the survey volunteers. I gained a kilo!