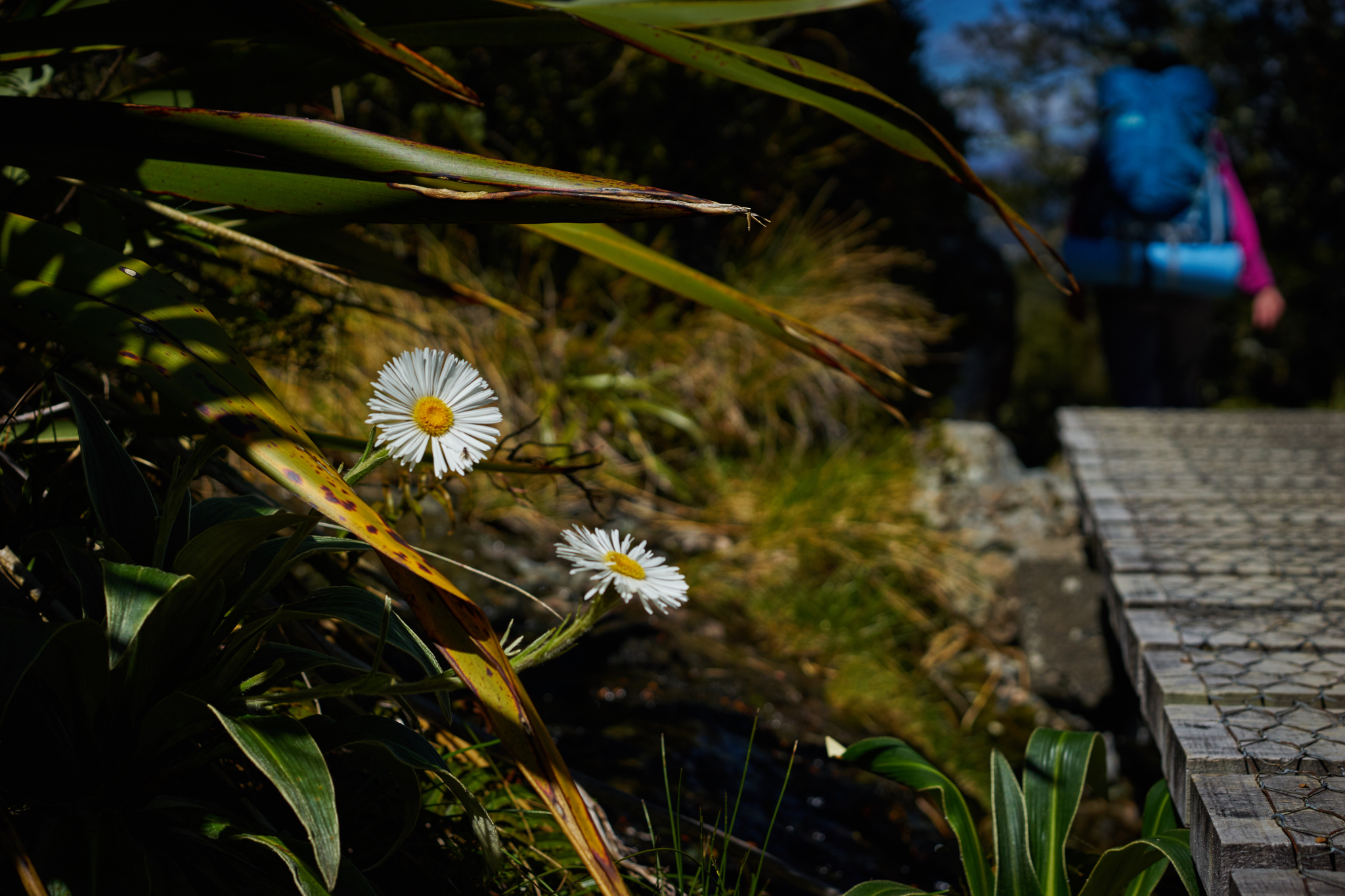 New Zealand’s nine Great Walks are premier tracks that pass through diverse and spectacular scenery. From native forests, lakes and rivers to rugged mountain peaks, deep gorges and vast valleys…there’s a Great Walk for everyone! https://www.doc.govt.nz/GREAT-WALKS

I wanted to do at least one of the nine Great Walks on our New Zealand trip (there will be ten once the Paparoa Track opens in 2019). We had a couple of restrictions, the track had to be on the South Island, doable as an overnight tramp. Routeburn Track is 32km long and it fit perfectly around our plans to visit Milford Sound and Te Anau. There are three huts along the track for overnight stays at Routeburn Falls, Lake Mackenzie & Lake Howden. Logistics were a bit complicated, the track can be started at Routeburn Shelter which is in Glenorchy (near Queenstown) and ends at the Divide which is on the Te Anau – Milford Sound road, both being more than 300+ kms apart by raod. Starting at either end required the car to be relocated to the trail end overnight. After booking two bunks at Routeburn Falls hut I arranged for our rental car to be relocated by EasyHike. I planned our time in Otago around our Routeburn tramp and made bookings accordingly. On the eve of the hike we picked up our lock box from Queenstown to put our car keys in for the car relocation. The whole process was effortless, after picking the rental car at the airport all we had to do was call up EasyHike and provide them with our rental details, they handled the rest.

On the morning of the hike, I looked up our Routeburn Hut reservation emails to keep them handy when we check-in at the Department of Conservation visitor centre in Queenstown. The email read, “We are pleased to confirm your booking starting on Tuesday, 28 November 2017.” That didn’t seem right?! Today is the 27th, we are staying at the hut on the 27th, our car is being relocated from Routeburn Shelter to the Divide on the 27th, we have reservations at the hostel in Te Anau for the 28th. Dang! I had booked the wrong dates!! I felt like such an idiot. I didn’t know what to do.

Lady at the DOC had heard this story before, multiple times. All the huts were full for the 27th she couldn’t move our reservation. Fortunately, there was space at Lake Mackenzie campground which she transferred our reservation to although we wouldn’t get any refund on our hut reservation. Since we didn’t have a tent to sleep in, she directed us to Small Planet Rentals on Shotover street which was a 5 mins away. We waited outside for the store to open at 9am, which it did but their rentals were next door, so we waited anxiously for another 10 mins for a lady to open the rental store.

Our car was already packed and ready to go, we dumped the tent and two sleeping pads and headed for Glenorchy. The hour long drive to Glenorchy is picture post card perfect, I mean it had to be, it literally takes you to a place called Paradise! Winding roads dotted by flowers in bloom along pristine blue Lake Wakatipu, the Remarkables guarding the other shore, would have to wait. We were pressed for time and would come back later to appreciate it’s beauty at a more leisure pace.

We reached Routeburn Shelter by 10:45am which would have been on time according to our original plan but now we were going to cover ~20kms to Lake Mackenzie instead of 8kms to Routeburn Falls. This meant we had more elevation to climb as the lake is over Harris saddle which is the high point of the trail. The weather forecast predicted afternoon showers. My plan was to charge up and over the saddle before the weather came in. Once over the saddle going down hill in the rain wouldn’t be too miserable. After unpacking the car I put the car keys in the lock box and locked it to the rear towing hitch and we were on our way.

First few kilometers were relatively flat along the stream through a dense forest. A thick layer of moss carpeted the forest floor in shades of green and brown. Ferns were abundant, no surprise as New Zealand has about 200 species of fern! It was a bit humid but walking in the shade was comfortable. All the signs along the trail gave a time estimate instead of a distance and we were making good time at each interval. Routeburn Flats is an open meadow where water from the falls meets the stream. From here the steep uphill commences, 1.5hrs-2hrs to Routeburn Falls hut the sign said. We reached the hut by 2pm and took break for a snack and to refill our water bottles.

From the hut the trail continues upwards passing the mouth of the falls onto a grassy rolling plateau which was surrounded by cliffs dotted with white flowers on their lower slopes. We didn’t stop by the falls but rather pressed on. Madhu was starting to get a little tired but she soldiered on. All along the trail we had a steady flow of hikers heading in the opposing direction. As the day progressed the number of hikers heading to Routeburn Shelter petered out. There was a group of English & French hikers whom we played leap frog with all along the plateau.

As we started going higher up the side of one of the cliffs, we could see Lake Harris in the distance, not too far away. We made our way up by the lake and turning the corner we could see Harris saddle, the high point of the trail. It had been overcast all along but on the other side of the saddle it was clear. The weather gods had been kind. We stopped at the emergency shelter for a well deserved lunch. Madhu had prepared all the ingredients for awesome sandwiches, which we made short work of. The Europeans didn’t have overnight permits and were planning to head back down after having lunch at the shelter. We bid farewell and continued towards Lake Mackenzie. Both of us were in a more cheerful mood as it was barely 5pm and majority of the uphill was behind us. The traverse continued for a few kilometers, occasionally it would go uphill to our dismay. Finally rounding a corner we could see Lake Mackenzie, it’s vibrant colours reminded me of photos of geysers in Yellowstone, albeit without the red orange hues.

The walk down to the lake was enchanting. The forest here felt really old, untouched perhaps. Layers of moss growing a good couple of inches thick coating every rock, root and branch. It was as if the ground was crawling up the trees. The camping sites were a little further away from the hut with signs warning campers not to use hut facilities, almost feeling discriminatory! There were about 10 sites adjacent to a shared open kitchen space with a bench. We took up one of the three remaining campsites and setup our tent. I was glad we made it to the campsite with a lot of daylight remaining. After having dinner we relaxed by the lake shore before calling it a night. I came back later at mid night but didn’t get any good long exposures.

Next day’s hike out was ~12kms of mostly down hill so we took our time to get going. After a lazy breakfast we packed our tent and gear. A formation called ‘Split Rock’ was 15 min walk from the campsite so we checked it out before heading to the Divide. The walk to the Divide was fairly monotonous with the occasional interesting waterfalls (Earland falls). After one final steep uphill push near Lake Howden it was all downhill. Our car was waiting for us in the parking lot. The driver had even felt a thoughtful note wishing us well on our journey and a map of attractions nearby. As always, everything turns out of the better and missing our hut reservation meant we got a chance to experience tent camping in New Zealand.