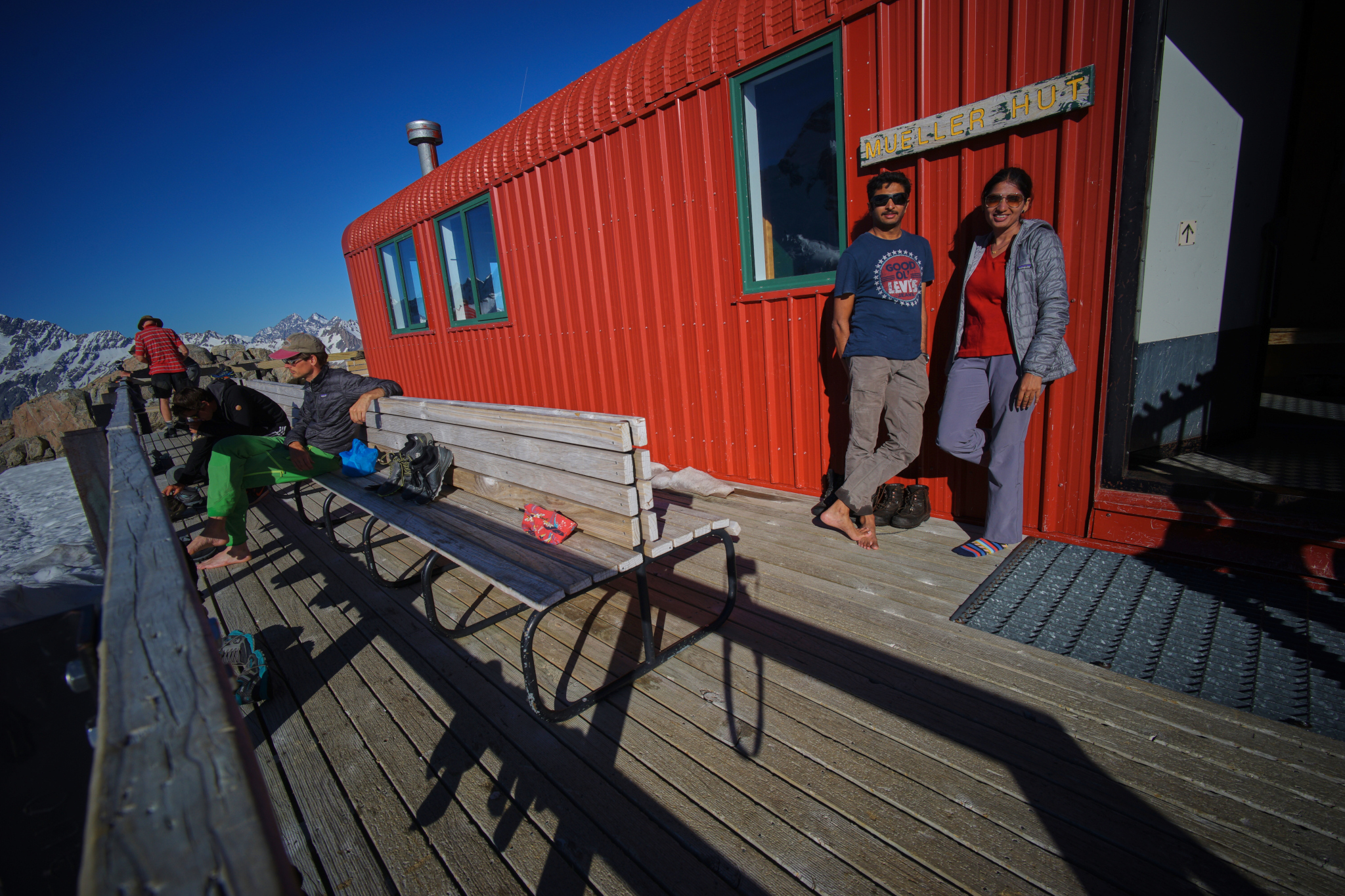 The Mueller Hut hike featured prominently in all the blogs, travel sites I looked up when I was researching our trip to New Zealand. I was following an excellent itinerary from the blog In a far away land for our road trip around South Island. It would be our first hike in New Zealand, our first tramp as the antipodeans call it! We were planning to go around Thanksgiving holidays since I was short on vacation days. It would be early spring in New Zealand so I wasn’t sure if the hike would be doable without extra gear. Nevertheless, I went ahead and made the reservation for 2 bunks at the hut. It being August, the hut wasn’t full yet.

We flew into Christchurch from Wellington and picked up our rental car. From Christchurch we drove to Lake Tekapo where we had reserved a cabin near the lake at a motel. Lake Tekapo is one of the best places in the southern hemisphere for star gazing. Unfortunately, the star gazing tour at the near by Mt.John observatory was booked for the whole week. We drove up to the observatory anyways during the afternoon for some great views of the lake and the surrounding mountains. After the observatory we headed to Lake Pukaki. From the lake shore we could see Mt.Cook in the distance. I was under the wrong impression that Mueller Hut is actually on Mt.Cook, and looking at all the snow on the mountain I was highly doubtful of our hike the next day. We came back to our cabin and after preparing dinner spent the evening star gazing by Lake Tekapo. At first a lone star appeared on the horizon but with minutes the whole sky was light up. It was just amazing. I played around with my camera trying to get some long exposure shots.

The next morning we drove along the shores of Lake Pukaki to Mt.Cook village. We had to check in at the Department of Conservation Visitor Centre to pick up our permits. We arrived before the centre was open so we walked around the village. I wanted to check out Sir Edmund Hillary Alpine Centre but that too was closed so we just paid our respects to the statue of the great man. I was anxious what the trail conditions might be, would we need gear? The person ahead of us at the visitor centre was also checking in to go to the hut, I was trying to listen in on their conversation while we perused around. There was snow on the trail, but crampons and ice axes were not required. We were on! After parking our car at the designated overnight backpackers parking spot we got ready for our hike. We had cooked extra food the previous night to take with us so all we needed to carry were sleeping bags, jetboil, water, trail food and dinner.

We started on the Hooker Valley track heading towards Mt.Cook passing by Freda’s Rock (named after the first woman to climb Mt.Cook) and the Alpine Memorial. I soon realised we were heading in the wrong direction, I guess I was just drawn to Mt.Cook. Although it looked like the mountain was brooding, the seracs formed imaginary facial features of the mountain. All along the hike we would comment on Mt.Cook’s mood. Back tracking a bit we were on the Kea Point trail which was the route to Sealy tarns and Mueller Hut. The hike up to Sealy tarns is also known as the stairway to heaven, rumour has it Robert Plant wrote the song after hiking up the stairs. The trail literally has wooden stairs, ~2200 of them, all quite steep. As we climbed the stairs we came across Mt.Cook lily flowers which were in bloom. It was quite warm but got cooler as we went up the stairs. At one point one of the stairs had “#1000” etched into it, which wasn’t encouraging. I hadn’t told Madhu that there were 2000+ steps and we were only half way up. We took a much needed break at the Sealy tarns. I actually had to look up what a tarn meant: a small mountain lake. The view from here was spectacular, one could see the mouth of the Hooker glacier and Mt.Cook in the distance.

The stairs end at the Sealy tarns. From here on it would be a normal trail which was marked with orange poles to make the trail visible in the snow. There was enough foot traffic up and down the mountain for one to plot the route by just looking at hikers up the route. Majority of the hikers coming down were having fun glissading, some even going up for seconds! Steadily we got up the 3 large snow fields to get to the ridge. From here the trail crosses over to the other side of the mountain and after a slightly exposed traverse one can finally see Mueller Hut with some glimpses of Mueller glacier. Madhu was glad to see the hut, finally she could get off the snow and relax. The hut warden went for a ski run (which I thought was super rad) just as we got to the hut.

The hut had 2 dorms with 20 bunks each, a common kitchen area and a nice deck outside. The kitchen had common use stoves and a couple posters about the history of Mueller Hut, the current hut being the 5th iteration. It was just 5pm and since there were a few hours of day light left I decided to head out for a exploration/photography walk. Madhu decided to read and enjoy the views from the deck when she spotted the first Kea (an endangered endemic alpine parrot). Mueller Hut is right at the base of Mt.Ollivier which was Sir Edmund Hillary’s first major climb. It is an easy 4th class scramble from the hut but I’m sure back in the day it would’ve been quite an endeavor. The summit had amazing views of the Sealy range, Mt.Cook, Hooker valley and the Mueller glacier.

Back at the hut there was a steady stream of hikers, some taking a well earned rest on the deck before heading back down others settling into their bunks or preparing dinner. We had a nice dinner in the kitchen watching the day light fade changing the mood on Mt.Cook from brooding to almost asleep. After our amazing star gazing experience at Lake Tekapo I was excited for another session of night photography. We were in bed by 9, I was hoping to wake up around midnight but didn’t set an alarm since I didn’t want to wake our bunk mates. My mental alarm generally works pretty well and it didn’t let me down. The skies were clear and it wasn’t terribly cold, no wonder I wasn’t the only photographer out on the deck! After playing around with a few exposures I went back to bed. Earlier in the evening when the hut warden returned, she mentioned the sunrise was EPIC so I didn’t want to stay up too late.

Early in the morning there was just enough activity in the dorm to stir my sleep. I looked out of the window and the darkness was lifting, the sun wasn’t up yet but I rushed out of my bunk. Madhu was still sleeping so I didn’t disturb her. I ran to the ridge which leads to Mt.Ollivier summit and waited. It would be a few minutes more, Madhu also made it. EPIC would be an understatement. The sky changed colours, colours which are hard for me to describe, fiery red orange mixed with purple violet hues silhouetted by jagged snow peaks. We watched in silence, treasuring a beautiful moment which would soon be an everlasting memory.

A couple of playful Kea visited the hut that morning. It was fun watching the birds walk about the deck showing no fear of humans but only curiosity. Once the icy conditions thawed, we started our return journey. When we got to the first snow field, a couple of hikers ahead of us glissaded down the snow field. Madhu wasn’t too keen to walk down so we followed as well. Madhu sat in the front with her backpack on her lap and I sat behind her. Off we went like a bob sledge team! After three runs we ran our of snow and were a bit disappointed, it had been so much fun! The early morning fog had rolled into the valley and walk down from Sealy tarns felt like we were walking in the clouds. The rumoured Stairway to heaven song inspiration feel apt.