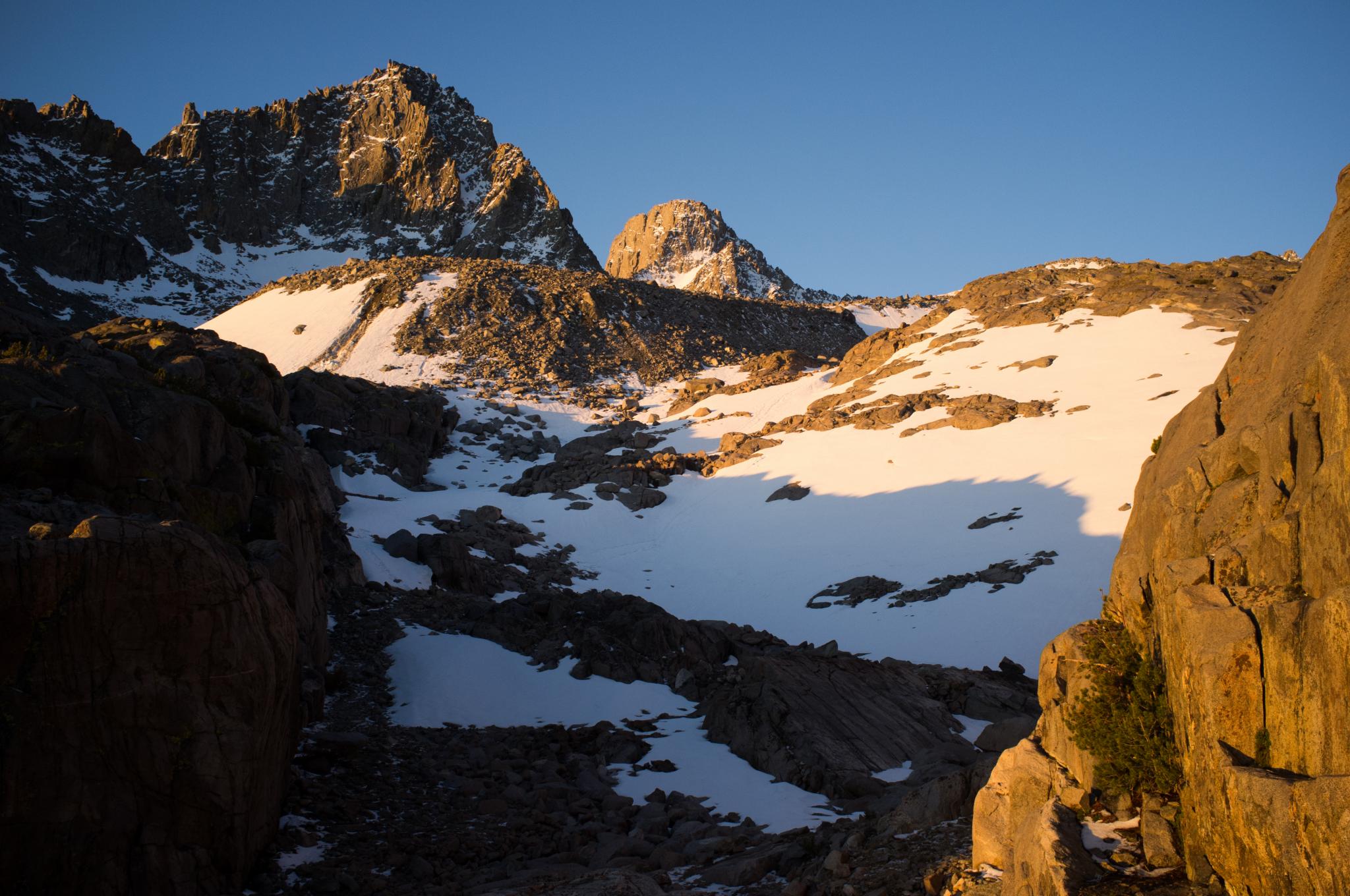 After learning my lesson last year with regards to scoring back country permits, I was prepared for this season. I like to plan out my trips in advance and don’t like the uncertainty of walk up permits. To kick off the High Sierra season the plan was to climb Venusian Blind (5.7) at Temple Crag. I had four permits for the weekend of 6th June 2015 with Brian, Hannah and Corinne.

We had a casual start from LA on the 6th and strolled into Alabama Hills Cafe in Lone Pine for brunch. I went by the Inter Agency Centre in Lone Pine to pick up the permits while we waited for the food. I don’t remember who ordered what, but as usual it was awesome and I had a hard time finishing off the plate.

We drove up to the trail head at Glacier Lodge from Big Pine. Brian volunteered to drive the car to the overnight parking area which was about a mile away from the trail head. We unloaded our gear and were on the Big Pine North fork trail well before noon. I hadn’t lugged such a heavy pack since probably the mountaineering course I did a couple of years ago. It felt just as heavy now as it felt then. The forecast had been for cold weather so we were prepared with warmer clothes. I had taken on the responsibility for making dinner that night so I had an extra special something in my pack which slowed me down, well at least that was my excuse!

The trail climbed at a fairly gentle grade along the stream which came down from the lakes. There was a fair amount of foot traffic, mainly day hikers on the way back. I met a group of hikers who originally were from Ahmedabad but now settled in Cerritos. The older gentleman was talking about how he never trekked in India but now had a real passion for it. He was quite surprised when I pointed to Temple Crag and told him we had planned to climb that!

Considering the weather, we had decided to abandon the Temple Crag climbs and instead try to climb the Swiss Arete route (5.7) on Mt.Sill. The plan was to hike up to the third lake and set up camp there for the night. As we got closer to the lakes, Brian and Corinne suggested we push further and try to get up to Sam Mack Meadows and camp there for the night instead. It was barely 4pm in the evening so it was totally doable. I was already feeling worked and wasn’t really up for another 1000 ft of uphill. The clouds were looking ominous and it started snowing within a few minutes which made the “Let’s camp by the third lake.” an easier sell.

We found a lovely spot overlooking the third the lake. Not long after we had pitched the tents did it really start to come down. It sounded like hail but apparently was ‘Graupel’ I was glad I picked up the vestibule for my BD Hilite tent.

Since I hadn’t been contributing much in the food department in our last few trips apart from GU which wasn’t appreciated, I wanted to cook something special for dinner. I had made chole on previous trips to the mountains but I wanted to raise the bar and some Paneer Tikka Masala would do just that. I cheated a bit by marinating the Paneer and making the tomato puree at home but I think I made up for that by lugging it up all the way. Once the Graupel died down I started preparing the meal. I highly doubt anyone else has made Paneer Tikka Masala above 10,000 ft. Everyone was quite hungry and we made short work of it.

It was still bright outside so we played cards for a while (Judgement). I think I won. We went to bed early around 7pm with our alarms set for a 2:30am alpine start. I have a terrible time sleeping in a tent and it only got worse due to the elevation. I felt like I was waking up and checking the time almost by the hour. Finally around 11pm I got some semblance of sleep.

We donned our headlamps and were on the trail by 3am. As the skies slowly started to brighten we reached Sam Mack Meadows. A couple who had passed us the previous evening had camped at Sam Mack and were just about ready to launch their summit bid.

The first rays of the morning painted the mountain in a lovely golden hue.

Brian and Corinne were charging up the snow covered talus fields and were soon overlooking the Palisades glacier. Hannah and I made it good 10-15 mins later. The view was spectacular. The craggy peaks of the Palisades range towering over the glacier.

Mt.Sill, North Palisade, Starlight Peak and umm the other one, Pomegranate? (Polemonium Peak)

The route ahead would take us along the base of Mt.Gayley towards Mt.Sill at which point we would have to go up a few hundred feet to gain the notch between the two and then descend on to L shaped snowfield at the base of Mt.Sill, crossing which would take us to the base of the climb which would be 5 pitches and then some more 4-5th class to the summit. Still long ways to go! I was apprehensive about our chances. I was moving slowly, I could keep going but not fast enough. We roped up none the less. Brian felt the snow conditions didn’t call of crampons so onwards we went. Brian, Corinne, Hannah and then me. The weather was still holding up with projected possible thunder storms around noon. We reached the base of the notch at around 9am. Hannah and I were tired and were moving slow so we all decided that we should all turn back. We were a little disappointed but we knew that it was the right decision. The couple following us forged ahead and later on Facebook told us they summited at 8pm!

Since we had plenty of time to make our way back we decided to have some fun in the snow. Brian, Hannah and Corinne made a few glissade runs, I worked on my French Technique. We headed down to the mouth of the Palisade Glacier. It was truly majestic! And quite the experience to get up so close!

There I was, standing next to
glacier, probably less than 200 miles from Death Valley one of the hottest places on earth! This land is crazy!

(Hannah sunk all the way down to her shoulders on the way back walking in the snow and Corinne had to deploy some advanced shoe rescue techniques to save the day.)