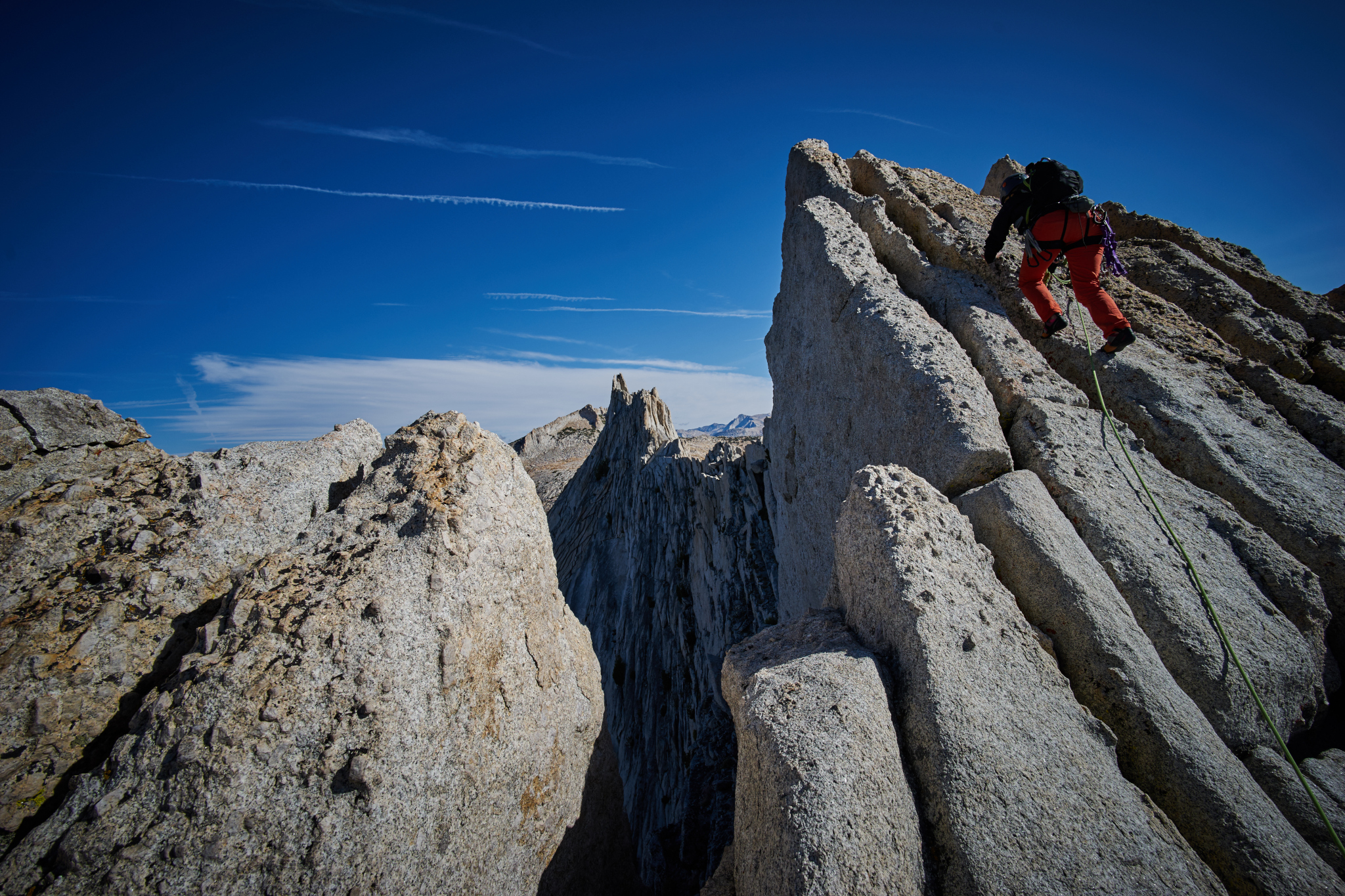 I had visited Yosemite on four prior occasions but all of them had been restricted just to the valley with the occasional drive to either the Mariposa or Tuolumne groves. Every trip had been mostly in a tourist capacity apart from the hike up Half Dome via the cable route. This trip would be different, it would be a climbing trip to Tuolumne Meadows. I was planning the trip for late September but we decided to do a weekend trip prior to the Labour day long weekend. The week leading up to the trip wasn’t great for me and I felt I should skip and just relax at home. Thankfully Brian convinced me to do all my relaxing in nature and that way I could keep Hannah company as she was recovering from her knee surgery.

We drove from LA late in the evening on Friday after work with the customary Enormocast //enormocast playing in Brian’s car. Driving up to Bishop was eerie as the smoke from the fires in Yosemite cloaked most of Owen’s Valley. On the upside it gave the car a nice camp fire smell. I had never been beyond Mammoth Lakes on 395 so I was excited to find out what lies yonder. We didn’t have any camp site reservations so the plan was to drive up Tioga Pass and check for availability along the way. After trying our luck at a couple of camp grounds near the national park entrance we turned back and luckily found a camp site closer to Lee Vining. It was almost 3am by the time we slept.

Breakfast was at The Mobil, officially Tioga Gas Mart & Whoa Nellie Deli the most famous gas mart I’ve ever been or would recommend for food! I had a nova lox bagel (odd choice but it was good), everyone else stuck to Mexican fare.

This side of the park feels very different from the valley. Lots of lovely open meadows with giant granite domes in between just waiting to be climbed. And sure enough you couldn’t gaze up a dome and not find climbers on it. Brian and Corinne wanted to climb something mellow and decided on Tenaya Peak. Which was perfect since Hannah and I could chill by Tenaya lake. After Brian and Corinne were off, we did a beer run and found a shaded spot on the lake shore. Hannah set up a hammock and passed out soon. I lazed on the sand in the shade of a tree playing with my camera occasionally peering at Tenaya peak trying to figure out the way up. The lake shore was active with families relaxing on the sands, children playing in the water, couples walking, the occasional tourist gawking at climbers high up. The more active ones paddling out on to the lake, I drank more beer.

Hannah taught me how to play gin rummy while we waited. I did fairly well for a noob but Hannah was leading by the time Brian and Corinne got back. They had a great trip and all around it was day well spent. We headed to our camp site quite content. I was going to cook Chole (garbanzo beans) for dinner but the store at Lee Vining surprising didn’t have any. I ended up making a mixed vegetable preparation which wasn’t great.

Although my initial plan was not to climb, I couldn’t see myself spending another day chilling while everyone else seemed to be climbing. Brian wanted to do the Matthes Crest – Cathedral Peak link up so we decided to head out early morning on Sunday, do Matthes Crest and then see how we were on time to climb Cathedral. We were on the trail by before sunrise. We got up just high enough above the meadows to be greeted by an amazing sunrise. The clouds were rolling over the peaks on the horizon and the sky had a lovely purple haze.

Just being out there is enriching for the soul. The trail climbed gently passing through meadows and over granite benches making it’s way up to the wide gully between Cathedral peak and Echo peaks from where it drops a few hundred feet into valley of meadows. We passed Cathedral peak but no sight of Matthes Crest. The guide book said no tourist has ever laid eyes on Matthes Crest and now we realised why. As we started dropping down into the valley, we could finally see Matthes Crest, after about an hour and a half from the trail head.

We had decided to the traverse South to North which meant we had to hike all the way across the valley to the base of the climb which took us about half an hour. We came across a few guys who weren’t planning to climb so we were the first party on the climb. It was a lot colder at the base of the climb than it had been all morning and my hands were already going numb. We were going to simul-climb so we wouldn’t waste time and the climbing was fairly easy. Brain racked up and fired up the first pitch. Corinne followed and I started soon. This first pitch is the steepest part of the climb and the belay is just below the top of the traverse. My crux was climbing with numb fingers, that’s all I remember! My extremities freeze with the slightest hint of cold weather. Once we were at the top of the traverse it started getting warmer. The skies were clear and the views were spectacular. The knife ridge made for some fun exposed traversing, we stayed roped in just to be safe.

After a few pitches we reached the south summit and took a short break for food. We weren’t sure if we wanted to head on to the north summit or head back down. Traversing across to the north summit seemed a little exposed so we decided to head down. I was able to down climb to the notch between the summits and found rap anchors. The down climb was a lot easier than it looked initially. We rappelled two pitches to get back down quicker but it’s pretty easy to just hike down as well. Once we had packed up all our gear we headed back. Passing Cathedral peak we could hear a lot of “On Belay, Climbing” calls. There seemed to be a lot of climbers on the route which we used as an excuse to head back to the trail head and drive back to LA.

It was a lovely weekend, I’m glad I didn’t spend it lazing at home!