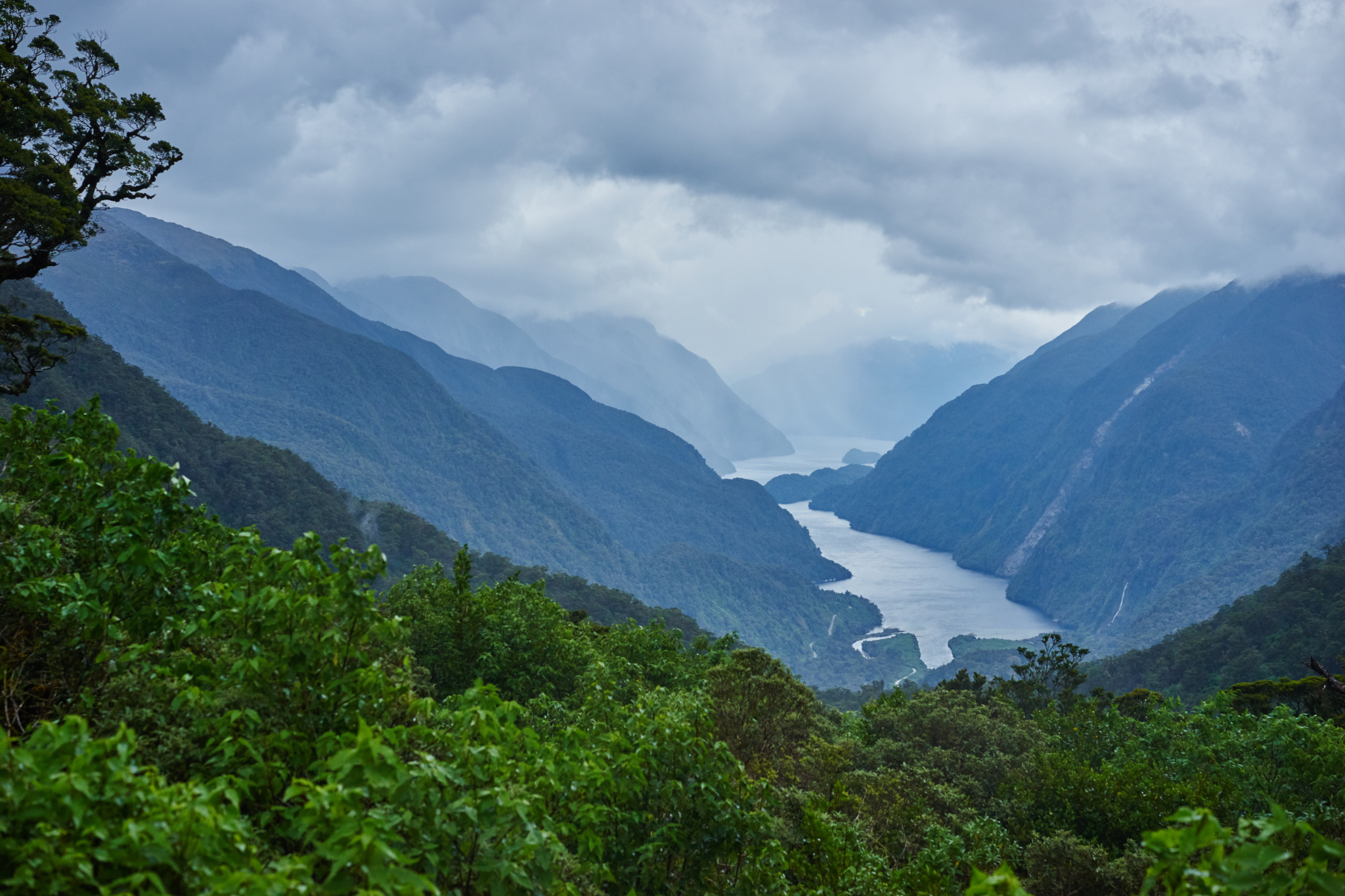 We had planned/booked majority of our New Zealand activities from Los Angeles itself. After tramping Routeburn Track we would pick up our rental car from the Divide and drive to Te Anau to spend the night at Lake front backpackers. The next morning we would drive to Milford Sound and either do a cruise or kayak depending on how worked we would be from the tramp. Before setting off for Routeburn we noticed brochures for Doubtful Sound while looking up cruise/kayak options in Milford Sound. After some quick googling we figured Doubtful Sound would be the ticket. More secluded and less touristy, tell me more!

I booked a 4 hour kayak tour with Fiordland Adventure and Madhu decided to do a day cruise with Real Journeys. I was required to report at 6:15am in Te Anau which meant we would be starting from Queenstown at 4am. The sun was rising as we were reaching Te Anau. It was a cloudy day and the sunrise looked spectacular. Madhu dropped me off at Fiordland Adventures and headed to Manapouri from where her cruise would be departing. I was joined by 2 guys from Singapore so it was almost a private tour instead of their normal 9 + 1 guide tour size. Cloudi, our guide greeted us outside their office and after signing some paperwork we got on a bus.

fiord: a long, narrow, deep inlet of the sea between high cliffs, typically formed by submergence of a glaciated valley.
sound: a narrow stretch of water forming an inlet or connecting two wider areas of water such as two seas or a sea and a lake.

Our journey would be: Te Anau to Manapouri by bus – Ferry across Lake Manapouri – From the power station at Lake Manapouri to Deep Cove by bus – Boat ride on the sound and then finally on to our kayaks! On the other hand one can drive a car to Milford sound. Accessibility itself culls majority of the tourists. It took a couple of hours to reach Deep Cove which is the docking site on the sound. Doubtful sound and Milford sound are fiords, not sounds as mistaken by early explorers like Capt.Cook.

Cloudi gave us a quick demo of how to get in/out of a kayak while we waited for Nipier (our boat captain) to bring our boat around. Once on the boat, we headed towards Rolla Island which was known for spotting Fiordland penguins. Alas, we didn’t see any even after ferrying around the island. Cloudi was filling us in on interesting facts about the unique flora and fauna found in this wonderland. For instance, the Kakapo, world’s only flightless parrot mate only when the Rimu fruits rippen which is roughly a 5 year cycle. Nipier directed the boat towards the Hall Arm of Doubtful Sound, the plan was he would drop us off at the mouth and then pick us up further up the arm for lunch and then we would go back out for a couple of hours before finally picking us up to go back.

Since it was just the four of us, we needed just 2 kayaks. The Singaporeans would be in one and Cloudi and I in the other. As I was sitting in the front, I wouldn’t have to do a lot of the rowing. This tour just kept getting better! The view from the water level really put the scale of the place in perspective. Thousand meter cliffs were towering from the water right above us. They were covered in ever green forests lined with the occasional waterfall. It rains a lot in this part of the world, and by a lot I don’t mean millimeter lot but in meters! The average annual rainfall at the mouth of the sound is ~10m reducing to ~4m as one travels inland towards Te Anau.

We kayaked along the shores of the arm changing sides depending on the current and wind direction. Kayaking by the shore was sometimes tricky as we had to navigate the branches hanging out over the water. It drizzled on/off but nothing too heavy. After about an hour and a half we headed towards the boat, Cloudi radioed Nipier who was taking drink orders. I welcomed the break as I was feeling a bit uneasy. I get seasick and was wondering if a four hr kayak tour would end up being miserable. Hot chocolate, warm tea and cookies were waiting for us on the boat. We had brought our own lunches as well. I felt better after eating the awesome sandwich Madhu had packed for me. Soon we got back on to the kayaks to explore some more. All along the sound, glacial activity was evident. Rounded off domes, U shaped valleys carved out by glaciers and in some places double Us where two glaciers would merge. After almost reaching to the end of the arm we turned around and headed back for the boat. Nipier had anchored by the shore, I could see the boat as a tiny spec on the water, once again reminding me of the scale, how small and insignificant we were.

After another round of warm beverages we started our long return journey. Along the way we did end up spotting a Fiordland penguin although it was just a fleeting glance. Nipier mentioned about bottlenose dolphins which frequent the sound and the rules and restrictions sailors have to abide by in their presence. On the bus journey back to the power station we stopped one last time at the high point on the road to look back and say goodbye to Doubtful Sound. Madhu was waiting for me in Te Anau. Excited to share our unique experiences we had a nice drive back to Queenstown. Both of us had made similar journeys to reach Deep Cove from where our experiences diverged. She had better luck spotting the wild life and traveled further exploring the different moods of the sound that unraveled before her. While I felt I had an intimate rendezvous, our two kayaks being the only ones out there on that part of the sound that day. Needless to say we were both in love with Doubtful Sound.